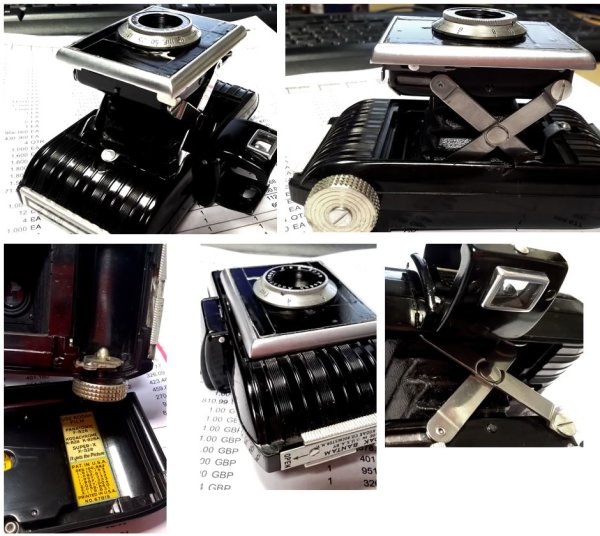 Kodak Bantam Special (1936-48)
Anastigmat f5.6 50mm
The Bantam Special is NOT a 35mm camera, It was made for 828 film -- a paper backed cousin of 35mm. The film gate size is a slightly larger than 35, at 28x40mm. 828 film is no longer an off the shelf product, though it can be ordered specially (and expensively).
The Kodak Bantam is a folding camera using Kodak's 828 film format (35mm film with only 1 perforation per image). It was a very compact camera, designed by the famous Walter Dorwin Teague. The basic model had a 1:12.5 Doublet lens and a single speed shutter. It appeared in 1935, together with another model that had a 1:6.3 lens and a rigid finder. Most Bantams were strut folders, but the F.8 model of 1938 had a rectangular pull-out lens tube instead. The luxurious Bantam Special was launched in 1936, and some other models appeared in 1938. Optical replacement finders were available for the models with rigid or metal frame finder. The Flash Bantam appeared in 1947. The Bantam RF of Arthur H Crapsey was added in 1953, not as new folder but as compact rigid body model for the advanced fan of the 28×40mm frame format. Other simpler rigid body viewfinder cameras followed, the Bantam Colorsnap series.
The Kodak Bantam RF of 1954-1957 was designed by Kodak's Arthur H Crapsey. It was made of brown plastic (bakelite), aluminium and other metal. It made 28×40mm exposures on Kodak's type No. 828 special 35mm paper backed roll film and was equipped with a non-self-cocking Flash 300 shutter and 50mm f/3.9 Kodak Ektanon lens. The Bantam's 3 element lens contains thorium oxide, and is in fact mildly radioactive. Like many of Kodak's more upscale offerings of the 1950's, it had an excellent optical viewfinder with superimposed coupled rangefinder. The film advance knob elevated for easier winding.
Next
Previous