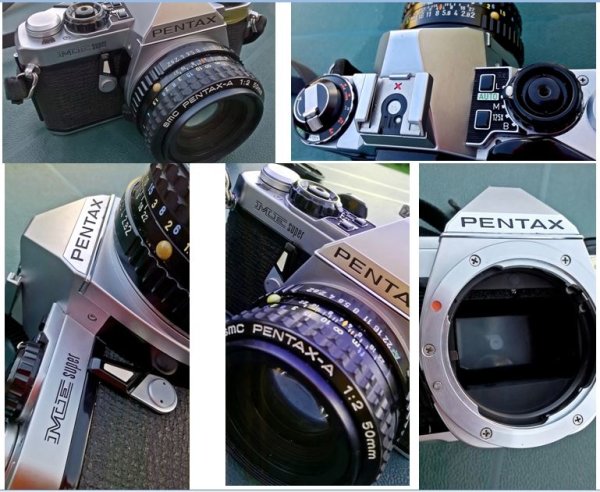 The ‘Pentax ME Super‘ was a 35mm SLR produced between 1979 and 1984 having been developed as a replacement for the Pentax ME as part of the ‘M Series’ of cameras.
It is unusually compact, lightweight and solid. The ME Super is a great little camera with aperture-preferred automation as well as manual exposure.
The MEs has an electronic focal plane shutter with metal curtains and a vertical movement. Shutter speeds are selected with up and down buttons rather than the conventional wheel used around that time.
With shutter speed range from 4 seconds to 1/2000 of a second, with flash synchronisation at 1/125 of a second. The hotshoe features an additional shoe contact for dedicated Pentax flash units, not seen on the preceding ME version.
In the event of battery failure, the camera can continue to operate at a shutter speed of 1/125 of a second. Two LR44 (or equivalent) batteries power the camera.
The camera has a 0.95x viewfinder, covering 92% of the field. The finder screen is fixed, with a split image and a micro-prism ring in the centre.
The exposure meter is a TTL open aperture centre-weighted type. The shutter speed chosen by the camera or the user is displayed in the finder, the aperture is not. LEDs display the shutter speed and inform of over/under exposure, possibility of shake, use of the EV-compensation and use of Manual mode.
The selector around the release button has five positions: L (lock), Auto, M (manual), 125x, and B. The Pentax ME Super can attach to the external winder ME (1.5 i/s) or the later Winder ME II (2i/s) and can also mount a Dial Data ME data-back,
The lenses are interchangeable with the K bayonet mount, and a series of SMC Pentax-M compact lenses.
The body was available with a chrome or black finish on the upper parts and base (the central body being always black). There was a special edition called ME Super SE, only sold in chrome finish; the differences are the SE marking and the diagonal instead of horizontal split-image device in the focusing screen.
Next
Previous