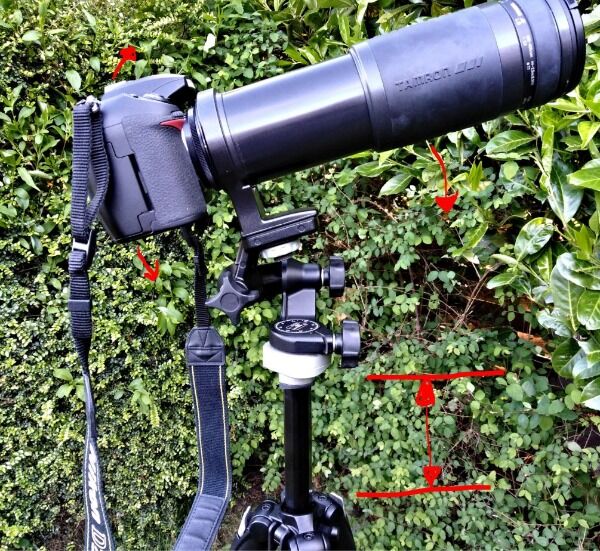 Like a lot of other people, I went out on the night of 6th May to try and capture images of the Super Moon, I decided to use my Nikon D200 and long lens, (which is 400mm but with the crop factor provides 600mm), I captured a few images along with daughter No2 using her Olympus Bridge camera.

When we downloaded our images and made a few tweaks in PaintshopPro X9, I was surprised to find that none of my images were sharp, I thought I had done everything I needed to in order to capture something reasonable, I used my trusty Manfrotto Tripod and the self-timer and shutter speeds ranging from 1/200 all the way to 1/1000.
So, what went wrong?

Well I did notice that the camera appeared to move slightly when the shutter fired, but at the time didn’t think anything of it and it was something I have not noticed before, in fact I would almost describe it as being quite a shudder, so I did some research, initially looking at my specific camera thinking it might have a fault, then more widely looking at DSLR’s generally .. and learned something new ..

How to solve the issue…

Firstly, the issue is not exclusive to me, so not a camera fault, but interestingly there were threads on bird photography sites which suggests this is a common issue, it was suggested that the issue is caused by the ‘Mirror’ rather than the shutter (so shouldn’t be an issue if you are ‘Mirrorless’)and that following measures can eliminate the issue ..

1) Using ‘Mirror Lockup’ before firing the shutter
2) Ensure the centre column is tightened up, interestingly mine wasn’t, because the moon is moving and as time was passing I kept reframing the shot
3) Ensure centre column is fully down – more rigid setup, mine was fully up!
4) Weight the tripod by hanging something from it
5) Steady the lens with your hand (not sure how without creating more vibration)

The video below demonstrates in slow motion the action of a mirror lifting and shutter firing, at 1/2000 sec the Mirror Slap is evidenced as the mirror going up and bouncing back slightly ..

https://www.youtube.com/watch?time_continue=91&v=CmjeCchGRQo&feature=emb_logo
Mirror Lockup: M-UP
Press the shutter release once to raise the mirror, again to take the shot. As I commented in my D2X review it would have been nice to have this combined with a self-timer so you don't need to touch the camera (or use a remote) to trigger the actual shutter release. (CSM d5; exposure delay mode; offers something similar but the delay is not long enough).

Note you CANNOT use the mirror lockup in conjunction with the self-timer, as they are separate settings on the mode dial switch.

Three super full moons will grace our skies in 2020. The first two appeared on March 9 and April 8, with this year's final supermoon appearing on May 7, looks like I have missed this years …
Other moons …
June: Strawberry Moon
This full moon is named after the beginning of the strawberry picking season. It's other names are Rose Moon and Hot Moon, after the start of the summer's warm weather.
It appears in the same month as the summer solstice, the longest day of the year (June 20) in which we can enjoy 16 hours, 38 minutes and 20 seconds of daylight.
This year, the night of the Strawberry Moon will also see a penumbral lunar eclipse take place. During the maximum phase of the eclipse, space observers in Europe, Asia, Australia and Africa may see the Moon's surface turn slightly darker than usual.

How to photograph the Moon …

There is a wealth of information on the web regarding how to photograph the Moon, here is a brief overview which might be useful … Your pre-set modes and full auto function will probably struggle to properly meter the moon, so ideally you should consider shooting in full manual mode, or at the very least, choose Aperture Priority mode.
ISO: Digital cameras should be set to 100 or lower to eliminate noise and grain.
Aperture: Because you are aiming for sharp images, shooting at f/11 to f/16, depending on your lens, will be the best place to start.
Shutter speed: The variables are many and include those mentioned earlier, such as the phase the moon is in, geographical location and desired shot, but on a clear night starting at about 1/60th to 1/125th should be a great starting point.
Manual Focusing: Switch to manual focus ..
Focus stacking: is a digital image processing technique which combines multiple images taken at different focus distances to give a resulting image with a greater depth of field (DOF) than any of the individual source images.
Focus Stacking will also increase resolution and stacking multiple images will reduce the amount of noise significantly, making the image really clean without the loss of detail you get from a normal noise reduction.